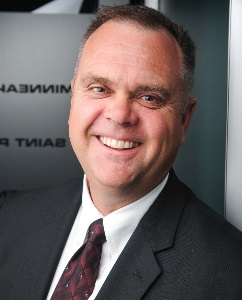 During a meeting of the NECA Board of Governors on Saturday, September 14, David Nielsen, Senior Vice President, Parsons Electric LLC, was appointed as NECA Vice President At Large for a two-year term commencing January 1, 2020.

David Nielsen is the senior vice president of electrical construction at Parsons Electric LLC, where he has worked for more than 20 years. He oversees all facets of the company’s electrical construction division, including estimating and pre-construction, design/BIM, marketing and business development, and project management. He is a longtime NECA supporter, having served in multiple local and national roles.

Parsons Electric LLC was founded in 1927 by JW Parsons. The company established itself as one of the nation’s premier electrical and communication systems providers. It specializes in large, complex projects in markets such as healthcare, industrial and petroleum, transmission and distribution, energy management, manufacturing and commercial as well as sports and entertainment venues, casinos, hotels and distribution centers. Parsons holds electrical licenses in 49 U.S. states and three provinces in Canada.

Nielsen’s NECA involvement began in 1992 in the area’s local chapters, Minneapolis and St Paul. He currently serves as president of the Minneapolis Chapter. He was involvedin NECA’s Government Affairs Committee and was the national chair of the NECA’s Political Leadership Council. He also spent consecutive terms as the chairman of NECAPAC for NECA’s national organization.

Nielsen has seen numerous changes in the industry over the years. The most significant are new technological and the advanced training that is provided. He believes participation is key to having a successful career.

Nielsen has been married to his wife, Diane, for more than 30 years. They have twin boys, Chase and Hunter, born in 1997. Both children currently attend college, and they have participated in a variety of NECA events, including trips to Washington. In his spare time, Nielsen enjoys being outdoors to spend time fishing, hunting and golfing.