What if we could turn back the hands of time by extracting CO2 from the atmosphere and convert it back to coal? What if you could reduce your company’s carbon footprint on every jobsite without spending tens of thousands of dollars? 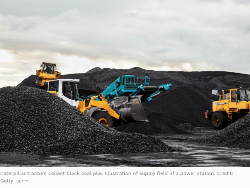 The thought of removing CO2 from the air has been around since the early 1970, introduced by the petroleum manufacturing industry. There is new development in the conversation of carbon sequestration. According to Forbes science contributing writer, Trevor Nace, scientists have discovered a breakthrough technology that pulls CO2 from the atmosphere and turns it back into coal! A team of international researchers (Germany, China, the United States and Australia) believe this is a first step toward an inexpensive and easy to replicate method for removing carbon dioxide from the atmosphere and repurposing it as solid coal.

Read about turning CO2 in the air back into solid coal »

It is estimated that 40.4 billion tons of CO2 are released into the earth’s air each year. One carbon capturing facility can remove 1,000 tons of CO2 annually (that would require roughly 4 million of these plants to be constructed to completely remove carbon from our air!). The cost of removing carbon has been prohibitive without industrial tax breaks and other financial incentives. Shell and other oil and gas companies spend billions of dollars to develop carbon sequestration plants to store CO2 in porous reservoirs in the Earth.

The international team of researchers is using a cerium-containing liquid metal catalyst which is also uniquely efficient at conducting electricity, to convert CO2 from the atmosphere into solid carbon coal. When electrically charged, the liquid metal converted into small flakes of coal. Beyond carbon sequestration, this process which literally turns back the hands of time environmentally speaking, could be an economical way of converting CO2 back to coal at every construction and industrial jobsite.