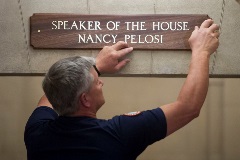 January 3, 2019 marked the beginning of the 116th Congress. The first order of business was electing Rep. Nancy Pelosi (D-CA) as Speaker of the House. Rep. Kevin McCarthy (R-CA) will serve as Minority Leader.

NECA’s Look Ahead: On swearing in day, the NECA government affairs team attended numerous events meeting the new and returning members of Congress. NECA’s official Welcome Back letter was distributed to all members of the House and the Senate. NECA looks forward to working with members of the 116th Congress over the next two years.

The new Democratic Majority, led by House Rules Committee Chairman Jim McGovern (D-MA), voted on an updated Rules package, which will govern the proceeds of the House of Representative for the entire 116th  Congress.

NECA’s Look Ahead: The Rules package passed the House, but some progressive members of the Democratic party voted with Republicans against it, saying it was not progressive enough. Three Republicans supported the Rules package, including Rep. Tom Reed (R-NY), to support provisions related to modernizing parliamentary procedure.

The package includes some of the following provisions:

On December 31, 2018, House Democrats announced their plan to immediately vote on January 3, 2019 on two bills that would address the current partial government shutdown. The first vote would fund all of the unfunded agencies, except for the Department of Homeland Security (DHS), through the end of fiscal year 2019. The second vote (in the form of a Continuing Resolution) would fund DHS through February 8, 2019 to further stall the fight over the border wall funding and allow for more time to negotiate specifically on border security.

NECA’s Look Ahead: House and Senate leaders held their first meeting with the President in several weeks at the White House on January 2, 2019 to discuss border security. Senate Majority Leader Mitch McConnell (R-KY) has made it clear that he will not bring any budget bill to a vote in the Senate unless it is something that the President will sign. While the President has refused to support any bill that did not include his $5 billion for a wall, there has been some indication that he may be looking to negotiate on that position.