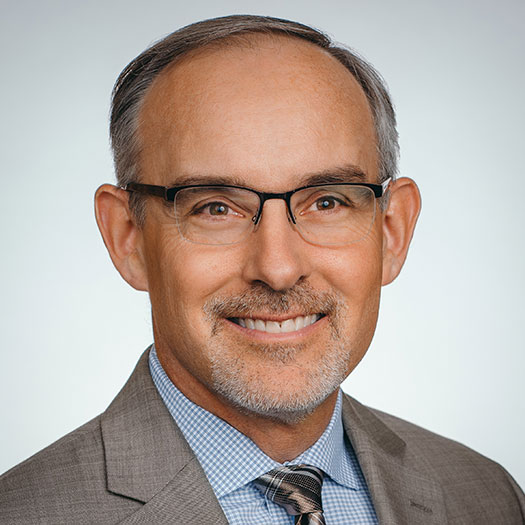 BACKGROUND
Lindley graduated from the University of Idaho with a degree in Accounting and received his CPA certification in 1991. Lindley joined the electrical construction industry in 1993 and became Vice President of Operations in 2009, where he managed the electric power division’s core functions: operations, fleet management, business development, as well as financial and administrative functions. Lindley became President of Hooper Corporation in 2019.

COMPANY INFORMATION
Founded in Madison, Wisconsin, in 1913, Hooper Corporation began as a mechanical contracting company. Hooper expanded to electrical contracting services as REAs formed in the 1940s. Specializing in outside line work, Hooper performs overhead and underground distribution and overhead transmission to 500kV. Hooper is a full-service substation construction and maintenance contractor as well. These services are provided from Hooper’s corporate headquarters in Wisconsin, as well as offices in Florida, Ohio, Michigan, and Colorado.

INVOLVEMENT WITH NECA
Hooper Corporation has been a NECA member since 1958. Lindley got his first industry experience attending a District 10 conference which motivated him to learn more about NECA and get involved. Lindley is currently the Governor of the Missouri Valley Line Builders Chapter and has served on the Board since 2012. Lindley has also served on the Missouri Valley JATC Board of Trustees since 2012.

INDUSTRY OBSERVATIONS
Lindley believes high-tech industry disruptors can change the industry overnight. An example of change is the significant consolidation of customers as well as contractors; closely held private companies now consist of larger firms with multiple companies. This growth reflects projects increasing in scale. Outside line electrical contracting has evolved from regional-based to national-based, with contractors working in much larger portions of the country. For these reasons, NECA is even more important on a national level and having one district for all outside line work is a tremendous benefit for contractors and the industry.

AWAY FROM THE OFFICE
Lindley’s proudest accomplishment is being able to work and succeed for his family. He and his wife, Mary, have two children – a daughter who is a Senior in college and a son who is a Sophomore. Lindley spends his free time with his family at the lake in the summer, where they go boating and fishing. Other activities throughout the year include hunting and snow skiing.