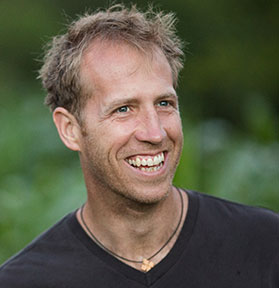 Jake Harriman is the founder and former CEO of Nuru International, a US-based social venture with a mission to eradicate extreme poverty in some of the most fragile regions of the world. He was inspired to found Nuru after being faced with the effects of extreme poverty in war-torn regions of the world during four tours of duty in the Middle East, Africa, and Asia. There, Harriman witnessed the most severe levels of poverty and developed a deeply-held belief that many 21st century ills including violent extremism can only be eradicated through a strategy that includes ending extreme poverty. After founding Nuru, he and his team grew the venture over the next twelve years to become one of the premier organizations at the nexus of security and development – empowering more than 130,000 people with lasting meaningful choices to permanently climb out of extreme poverty in some of the toughest places in the world.

Harriman has now turned his attention to helping protect the American Democratic experiment. In 2020, he founded More Perfect Union to disrupt and reform the current political system, heal our divided nation, and give the government back to the American people. Key early components of his plan include creating a reform-minded fulcrum of five new Members in the U.S. Senate, building a nationwide movement for unity and reform, and passing new legislation to reform the electoral system and structural rules and norms of Congress.

A decorated combat veteran and Stanford University Graduate School of Business alum, Harriman has been honored as a White House as a “Champion of Change,” selected as a Dalai Lama “Unsung Hero of Compassion,” and featured in profile pieces by Forbes, The Huffington Post, ABC News, and more. Exclusively represented by Leading Authorities speakers bureau, he is a graduate of the Presidential Leadership Scholars Class of 2015 and discusses his inspiring journey to found Nuru, as well as strategies to equip leaders to take charge of their own destinies and communities and unlock innovative approaches to age-old problems.

Born in rural West Virginia, Harriman attended the US Naval Academy before serving seven and a half years as an Infantry and Force Recon Platoon Commander in the Marine Corps. He led four operational deployments, including counter-terror operations in the Horn of Africa and two tours of combat in Iraq. Harriman’s experiences in combat convinced him that the “War on Terror” would not be won on the battlefield alone—and that the coordinates of someone’s birth place should not dictate the opportunities they are presented with throughout the course of their life. Jake left military life to enroll at Stanford where, with the assistance of roughly 30 peers and professors, investments from Silicon Valley, and donations from around the world, he moved to Kenya and founded Nuru International.

From 2017 to 2019, Harriman helped draft, introduce, and work to pass groundbreaking new legislation called the Global Fragility Act of 2019, which will equip America with new authorities and resources to prevent conflict and stabilize some of the most fragile regions of the world that pose a growing threat to US and global security.